Why rushing legislation isn't democratic and doesn't meet the standard.

The proposed changes to our Security Act needs close and robust scrutiny.  Unfortunately, our government does not share that view, so much so that it only allowed one day for submissions on the proposed Countering Terrorist Fighters Legislation Bill, and is also being very brief with the periods to submit submissions and consult in other legislation regarding national security.

The government's rational is that we have a clear and present threat due to the rise of ISIS is Syria and Iraq, we need to be in line with other governments (specially the USA) and with New Zealand co-hosting the Cricket World Cup with Australia this summer we have the potential for terrorist acts to take place

Chris Finlayson - like other National ministers - does not think consulting with the New Zealand public is important. However, I will give him this, he is honest in his distain for consulting New Zealanders.  Other ministers from National will fudge their way through consultation, talk the talk of a person who will listen to all sides and then completely ignore the majority and common sense anyway.

Because we all know Hekia Parata just barges ahead with changes despite consulting which shows 90+% of responders and research opposing her initiatives.  The fact that Charter Schools have been implemented and that she is pushing through the establishment of EDUCANZ and IES on top of National Standards, which all have been opposed by the education sector, academics, research, common sense and even parents (all of which make up the voting public) is testimony of how National does something despite it being a bad idea. 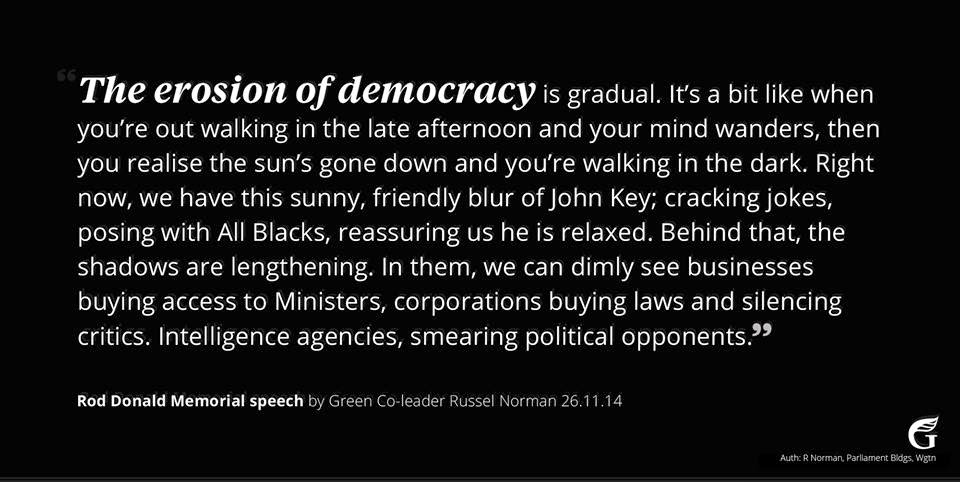 What disappoints me most is this is an obvious attempt to by-pass parliamentary and democratic processes.  National has been very good at doing this in the last few years.  They push through legislation with minimal consultation and using urgency more than what anyone should be comfortable.  But the above quote from a speech Russel Norman gave on the 26 of November at the Rod Donald Memorial, speaks of how our democracy is being so easily eroded by our 'friendly' Prime Minister and his ministerial colleagues.

The passing of this Bill and the others in the same stable are bound to contribute to a paranoid society.  Think about what life was like after 9/11, the London Underground bombings in 2005, France's legislation to ban the burqa..... 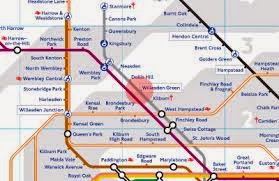 I was in London when 9/11 happened.  I lived in Willesden Green/Dollis Hill on the Metropolitan Line in north-west London at the time.  It was an area where not many English people live.  It had a high population of immigrants, particularly from Muslim countries, and also from the Caribbean, as well as an awful lot of Irish, Aussies, Kiwis and Saffas (South Africans) with the odd Canadian, Israeli and Swede thrown in - well, at least in our house.  I worked in schools with children who came from families who did not speak English as a second language and with girls who wore head scarves.  And the day of 9/11, as I watched it all unfold on TV after a call from Israel to my flat mate, I ate Halal chicken from Sam's Chicken around the corner from our house (it cost two pound for a combo and I was broke).

In the weeks following 9/11 people were nervous.  I kept getting texts from back in New Zealand along the lines of the following:

This went on for months.  It also didn't help that with Diwali and Guy Fawkes so close together and occurring at the same time the US was invading Afghanistan, any fireworks had us thinking that we were about to be blown up at any stage.

I also saw people verbally attack people of Middle Eastern extraction.  My Saffa flatmate came home one day telling us of a verbal attack he did.  After some stern discussion, I think I managed to inform him that he'd verbally attacked a Sikh man - nothing to do with 9/11.

And now we have evidence of this in New Zealand with young women and girls being verbally abused by other members of the public and even other religious communities such as the Jewish and Buddhist communities have expressed alarm at this legislation and how the public perceives them due to the current climate.  (Muslim communities facing a 'backlash' over law, 28 November 2014, Stuff).

My point here is that we became paranoid for a period of time due to the circumstances.  During that time a number of restrictions were put on to the public in many countries to tighten up security.  For example, in November 2001 I travelled by plane from London to Dublin to watch the All Blacks play  Ireland.  I had my make-up case as a piece of carry on luggage, as I had had in all the flights I'd taken prior to 9/11.  Security asked if I had nail scissors in there, which I did.  I had to remove them and put them in my checked luggage in case I planned to hijack the plane with them.  Prior to 9/11, nail scissors were not considered a threat, but now they are.

So prior to the rise of ISIS in Syria and Iraq (and wherever else), the fact that we may have disaffected people in New Zealand that are sympathetic to the cause of a rebel organisation like ISIS was not a concern to our government.  If it was, they would have considered similar legislation long ago and given it due process.  After all, there was Al Qaida around after all and we have had evidence of people running off to join them.  And how does this affect those New Zealanders who choose to fight for the French Foreign Legion?

It really is a spit in the face for all the New Zealanders who fought in the Spannish Civil War in the 1930s, or other similar events.  Because under this legislation they would have broken New Zealand law. 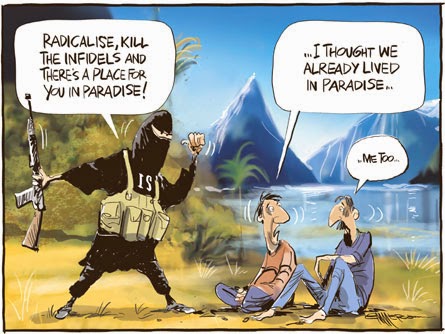 Really, what would be good is if our government, and other governments from around the world did, is look at why these people are so disaffected and want to run off to be cannon fodder for organisations like ISIS or Al Qaida before it.  What makes these people susceptible to falling for their PR/propaganda?  What is their education, home life, qualifications, employment status?  Are there patterns?

We were awarded co-hosting of the Cricket World Cup for 2015 in 2006.  So our governments since have had ample time to consider security issues and required legislation.  We held the Rugby World Cup, a junior women's world event for soccer/football and the world cup for the under 21 rugby teams as well as numerous other events.... any one of these could have been a target for a disaffected wannabe terrorist, yet we have had no events.

Michelle Boag's assertion on TV1's Q&A on Sunday 30 November about cricket events in the sub-Asian continent being cancelled due to potential terrorism threats and the fact that Muslim countries play cricket and increase the risk of a terrorist event was scare mongering at best, but racist and offensive to New Zealand's Muslim and Asian communities.

Quite frankly this pattern of our own government to shoot from the hip and pass crap laws in reaction to events and ideology without proper consultation and research or trials is well below the standard.  The lack of standards this government displays erodes our democracy.

Russel Norman and Metiria Turei from the Greens have stood up and said so.  I was heartened to hear Andrew Little say earlier this week that his SIS briefing did not back up the rush that this legislation is being pushed with.  He has indicated that Labour will not take it at face value and will look closer into it before deciding its position on supporting it or not.

Political scientist, Bronwyn Hayward, made similar statements about the process of parliamentary law being distorted by this government and how extreme their law changes are compared to the UK, Canada and Australia, who are not rushing through similar law, but are debating it (unlike Michelle Boag's comments that it was being put through without question in the UK).  These tweets from 30 November 2014 say a lot: 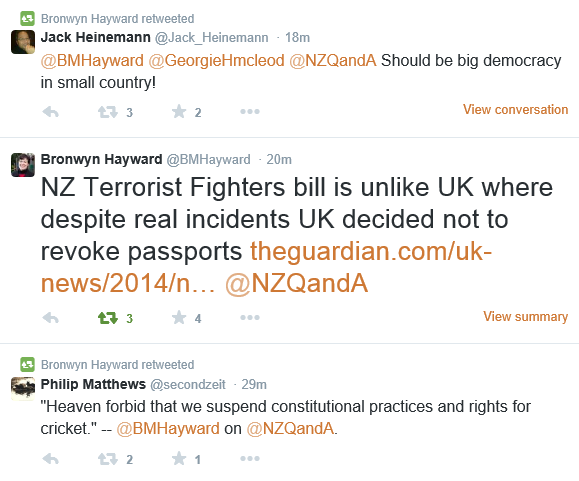 So, in my opinion, Chris Finlayson fails the standard.

And here is something to leave you thinking about this further I just found from 28 November 2014: 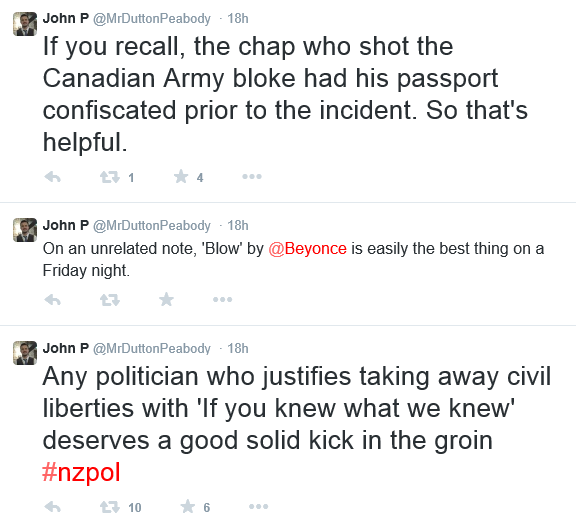 melulater
I have been teaching primary school children in the greater Waikato for over 22 years and I love cats, rugby, netball, reading, music and the beach. Currently I am half way through my Masters of Education in Global Education Policy. I got distracted by an election and I am now back full time teaching Y2/3s, and figuring out how to do my dissertation in 2018.